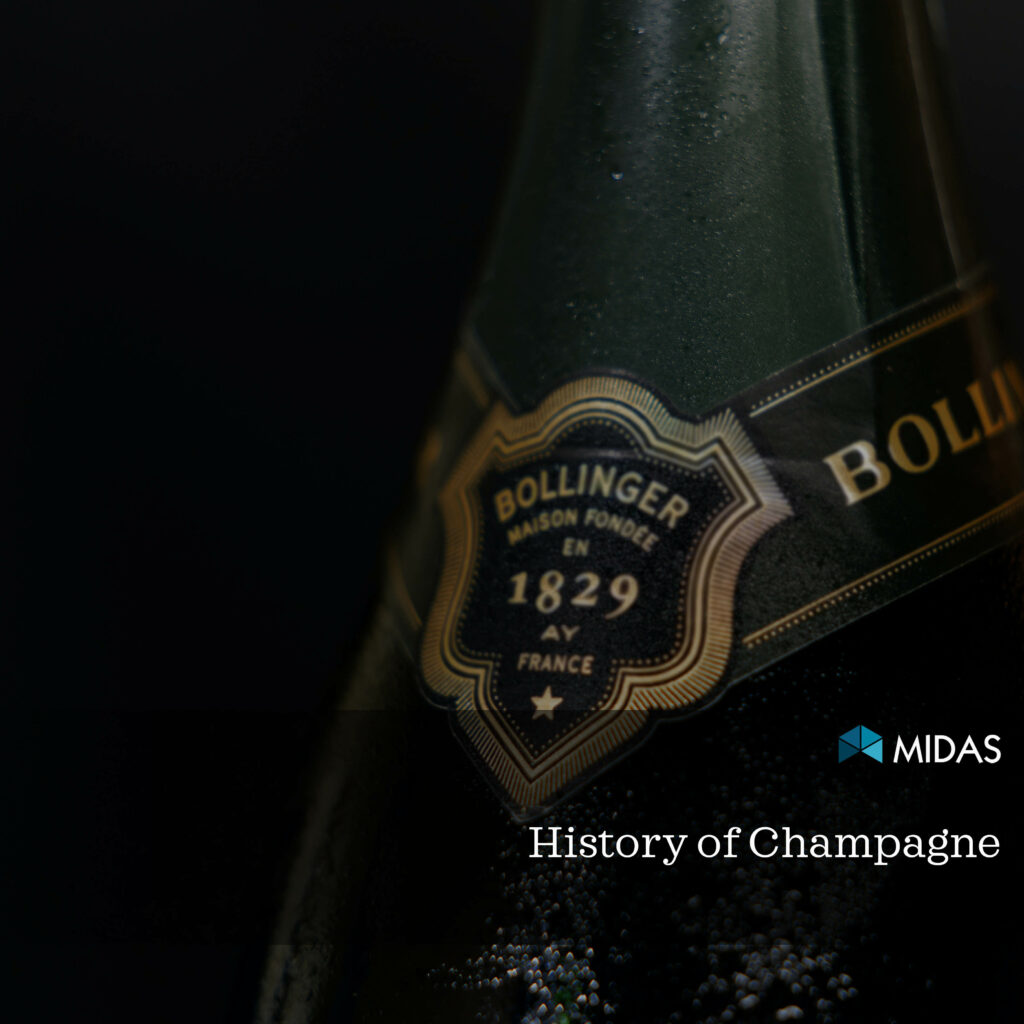 Champagne, a drink we all associate with the raising of a toast at a special or festive occasion. But what do we really know about its history? Firstly, like a lot of popular inventions, it too was discovered by chance.

In France, the Champagne region has been producing wines for hundreds of years. Some claim as far back as the Gallo-Roman period. ‘Champenois’, locals from the region, produced pale, pink-hued, still wines made primarily from Pinot Noir grapes.

The winemakers would distill their wine, but due to the cold temperature found in the North, the fermentation process would sometimes be interrupted. The consequence must be praised though, as it became the bubbly liquid that we are all so fond of today! During the freeze, the undigested sugars and yeast formed carbon dioxide and made an explosive bubbly mix.

In the late 17th Century, the ‘vin mousseux’ (sparkling wine) in the bottles that survived the pressure, started to become popular with French royalty, and shortly after Parisian socialites. The drink was considered rare and only accessible to the affluent.

By the 18th century Moët & Chandon, Taittinger, and Louis Roederer were all found in the Champagne region. They all competed to supply their produce at the most elegant and regal affairs.

The trend hit London, and they too decided that they wanted to recreate the bubbly liquid. Many historians believe that the thick bottle and cork synonyms with the champagne bottle today, was in fact, invented by the English and not the French in the early 17th Century. Next, the bottled sparkles began to spread through Europe.

Another popular misconception is that Benedictine monk Dom Pérignon, invented champagne. The monk did indeed make wine, he was a cellar master at Huntvillers Abbey, but he was in fact trying to remove the bubbles, not create them. The myth of him inventing champagne was actually a marketing tool used in the 19th Century by one of the subsequent owners of the Abbey. Apparently, when Dom Pérignon first tried the sparkling wine he shouted ‘come quickly, I am drinking the stars’. This quote was used in an advertising campaign, again reinforcing the ideology that the monk invented the bubbly drink.   He used the myth to promote the vineyards when sparkling wine was becoming popular. Evidently, the marketing tool worked and consequently stuck!

Champagne today is not too sweet, with the name Brut often placed on their label to identify the dryness. Early champagnes, on the other hand, were loaded with sugar, but this was also used as a ploy to disguise any fermentation issues.

It seems that a person’s palate and taste buds are significantly different depending on the drinkers nationality. Russians and Scandinavians like their bubbles honey-sweet, German, French, and American, semi-sweet, and for the English the drier the better. Over time, the English style has succeeded at becoming the most well received.

So how do you know you are getting a quality bottle of champagne? Similar to wine, it’s all in the label, you need to look for the ‘appellation d’origine contrôlée’. These are the regulators who make sure the wine is made under the strict guidelines and made using the ‘Champenois method’. To warrant this title they insist on a second fermentation in the bottle, only using the correct grape type: Chardonnay, Pinot Noir, Pinot Meunier, Pinot Blanc, Pinot Gris, Arbane, and Petit Meslier. The name ‘Champagne’ can only be used under strict guidelines for sparkling wine that is made in the champagne region of France.

In the region of champagne, some of the oldest champagne cellars have become UNESCO world heritage sites. In Reims, one such site is the chalk tunnels below the city where champagne makers such as Pommery, G.H. Martel, Ruinart, Veuve-Cliquot, and Charles Heidsieck all established their cellars. If you are ever lucky enough to visit Champagne in person, then going on an exclusive tour of these relics is a must.

At Midas, we are here to organises your exclusive tour of the Champagne region, just be sure to think of us when you raise your first toast!