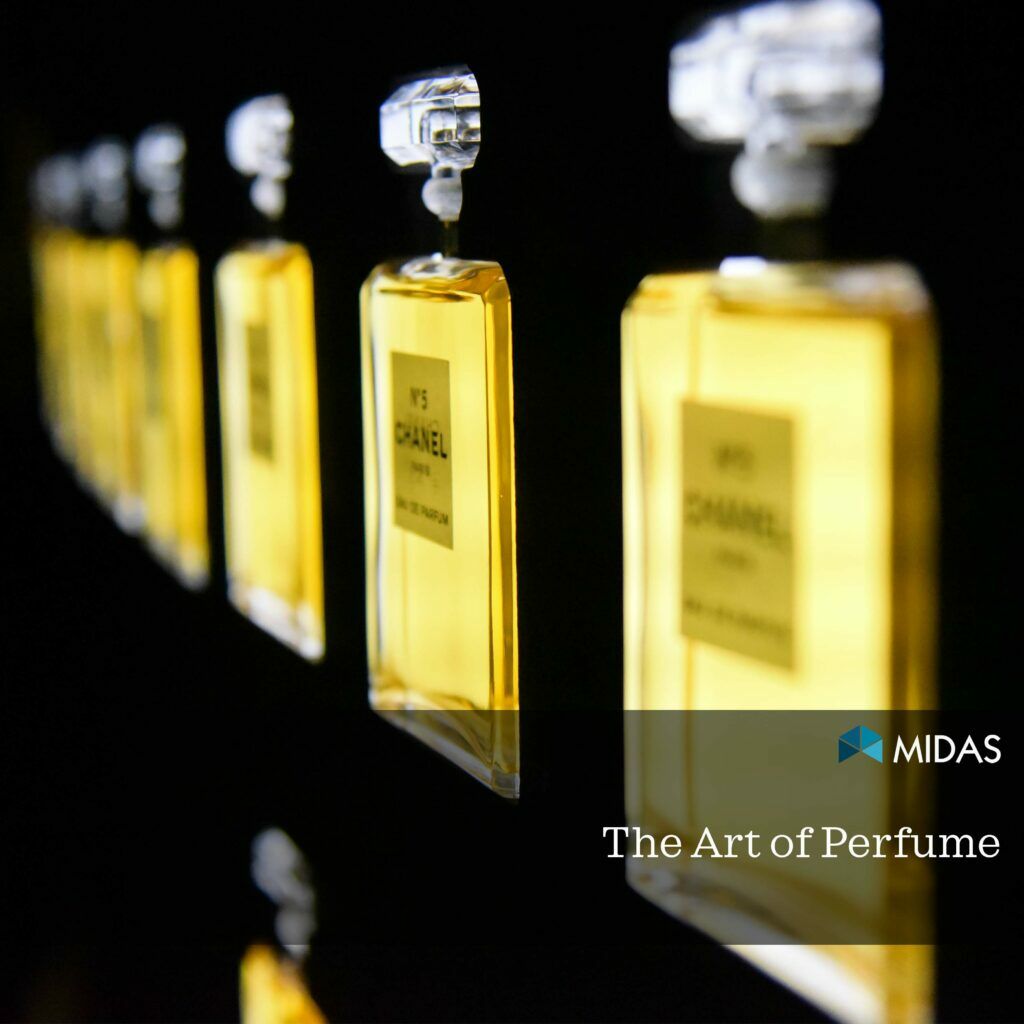 History of the Perfume Industry

It is known for sure that perfumes existed since Biblical times — in the Bible, there are several references to the use of aromatic oils.

Although perfumes also existed in India, most of their scents were based on incense. The earliest distillation of essential oil was mentioned in the Harshacharita text, written in the seventh century A.D. in Northern India. It also describes the use of aromatic eagle tree oil.

In order to smell the beautiful fragrance of jasmine, many girls in ancient Greece put small bags of jasmine extract and goat fat in their hair. Fat soon melted in the heat and slid down on their face, neck and shoulders, giving them the smell of jasmine.

The first chemist whose name remains in history seems to have been a woman named Tapputi, a perfume maker: she was mentioned on a cuneiform tablet of the second millennium B.C. in Mesopotamia. She conducted multiple distillations of flowers, oils, and calamus with other aromatic substances.

The Persian physician and chemist Avicenna conducted the process of extracting oils from flowers by distillation, a procedure most commonly used today. He first experimented with roses. Before its discovery, liquid perfumes were mixtures of oils and crushed herbs or petals that gave off a strong smell. Rosewater was more subtle and immediately became popular. Both raw materials and distillation technologies have greatly influenced Western perfumery and science development, especially chemistry.

In Europe, the first perfume was not for people at all. They were intended for leather goods (gloves, shoes, belts, etc.). Thanks to them, they got rid of the unpleasant smell of freshly made leather.

The art of perfumery flourished during the Renaissance in Italy, and in the 16th century, Italian products and developments were exported to France by Catherine de Medici’s personal perfumer Rene Florentine. His lab was connected to her apartment by a secret passageway so that no formulas could be stolen along the way.

France quickly became a European centre of perfume and cosmetics production. The cultivation of flowers for perfumery, which began in the 14th century, has become a leading industry in the South of France.

During the Renaissance period, perfume was used primarily by wealthy people to hide their body odour since people rarely washed then. By the 18th century, aromatic plants were being grown in Grasse’s vicinity to provide raw materials for the growing perfume industry. Today, France remains the centre of perfume production and trade.

In 1608, the world’s first perfume factory was established in the Convent of Santa Maria Novella, Florence. She became so famous due to the patronage of many princes and dukes and even the Pope himself.

Genuine perfumes consist of perfume alcohol and aromatic oils. The fragrance and price depend on quantity, combination and concentration. For example, in Chanel No. 5, 80 aromatic components are mixed. By perfume standards, this is quite a lot.

French fragrances, which are considered to be classic, are revealed according to the triad principle: this is when there is a base note, a heart note, and a top note. First, we feel the base note components, which smoothly change to the ingredients of the heart note, and then we hear the plume of the top note.

Rose oil is one of the most expensive components in the perfume business. Its cost is more than $ 5,000 per kilogram, and this value is constantly increasing. To get 1 kg of rose oil, you need to process a whole tonne of petals.

Iris is also not cheap. Its price on the market reaches $ 40,000 per kilogram.

Traditionally, the price of perfume is influenced by the number of ingredients used. Accordingly, the more components in the composition, the more expensive is the perfume.

Some flowers are completely odourless, but nevertheless, they are often used in perfumery, as combining them with other components gave them exciting and memorable combinations.

There is the only perfume reserve in the world, which is called the Osmoteque (https://www.osmotheque.fr/en/). It was created in 1990 in Versailles when the great idea came to Jean Kerleo, one of the perfumers of the famous perfume factory-JeanPatou. At the disposal of the Osmoteque is a massive number of fragrances from various brands — about 1800 fragrances. Plus, there are still 170 particularly unknown perfume formulas.

The most expensive fragrances in the history of perfumery are Clive Christians Imperial Majesty and Joy from Patou.

Clive Christians, the creators of Imperial Majesty, estimated this fragrance’s cost at $215,000 for one bottle. For sale, the perfume was poured into exquisite bottles, which were made of crystal with a diamond on the lid and gold foil on the neck of the bottle. In total, ten people expressed their desire to become the owners of this treasure.

There is also a fashion for fragrances. Patchouli was used to protect precious shawls from insects. This is the reason that Patchouli smell was famous back then and was considered expensive and en vogue.

The price of perfumes consists of spending on creating the fragrance itself, the cost of its composition, production costs, packaging, transport costs, advertising, plus a margin. That is, the scent itself will cost about 25-30% of the total cost. The mark-up on branded fragrances is about 180-200%.

It is believed that American perfumes are ideal for business style, and French ones will perfectly complement the image for a social evening. This is due to the fact that in these countries, there are different technologies for creating perfumes. French perfumes are revealed in stages, within 5-7 hours, and perfumes from America give out the entire palette of the fragrance at once.

This trend is particularly strong in the East, where perfumers often use oils and traditional local aromatic waters without alcohol. Although alcohol use in the Muslim religion is prohibited, it is allowed to beadded to a perfume. This is a global trend that is also noticeable in the West.

Some fun facts about perfume

Did you know that there is a swallowable perfume? It was coined by Sharef Mansy, a Harvard biologist, and Australian perfumer Lucy McRae (https://www.lucymcrae.net/swallowable-parfum). You need to swallow a kind of aromatic capsule for this experience, and later, along with the sweat, aromatic substances will be released. Such perfumes are not available for free sale, as they need to pass some testing.

A person’s sense of smell depends on gender – women usually outperform men in sensitivity to odours and the ability to recognise them.

Few people know, but women’s perfume can be selected by the colour of their hair, there is a logical explanation for this. The skin of girls with different hair colour has different properties. For example, the skin of blonde girls is quite dry, so it holds odours much better than, for instance, redheads.

Newborn babies have almost one hundred per cent sense of smell, but it is lost by 40-50% in the first year of life.

Up to 1000 neurones can participate in recognition of certain odours.

Perfume fragrances are associated with strong emotions, memories, and a person is able to remember all his life.

At exhibitions, scents have become more often used to touch the sensory channel and evoke emotions.

One of the most pleasant smells people consider is the aroma of vanilla, some smells of citrus, cinnamon, cookies and … coloured pencils. The author of this study is Dolores Malaspina, a professor of clinical psychiatry at Columbia University in New York.

When we inhale, we hear the smell, but when we exhale, it immediately disappears!

If you’re tempted to create a unique fragrance for yourself, your home, yacht or jet, we are here to make it happen.