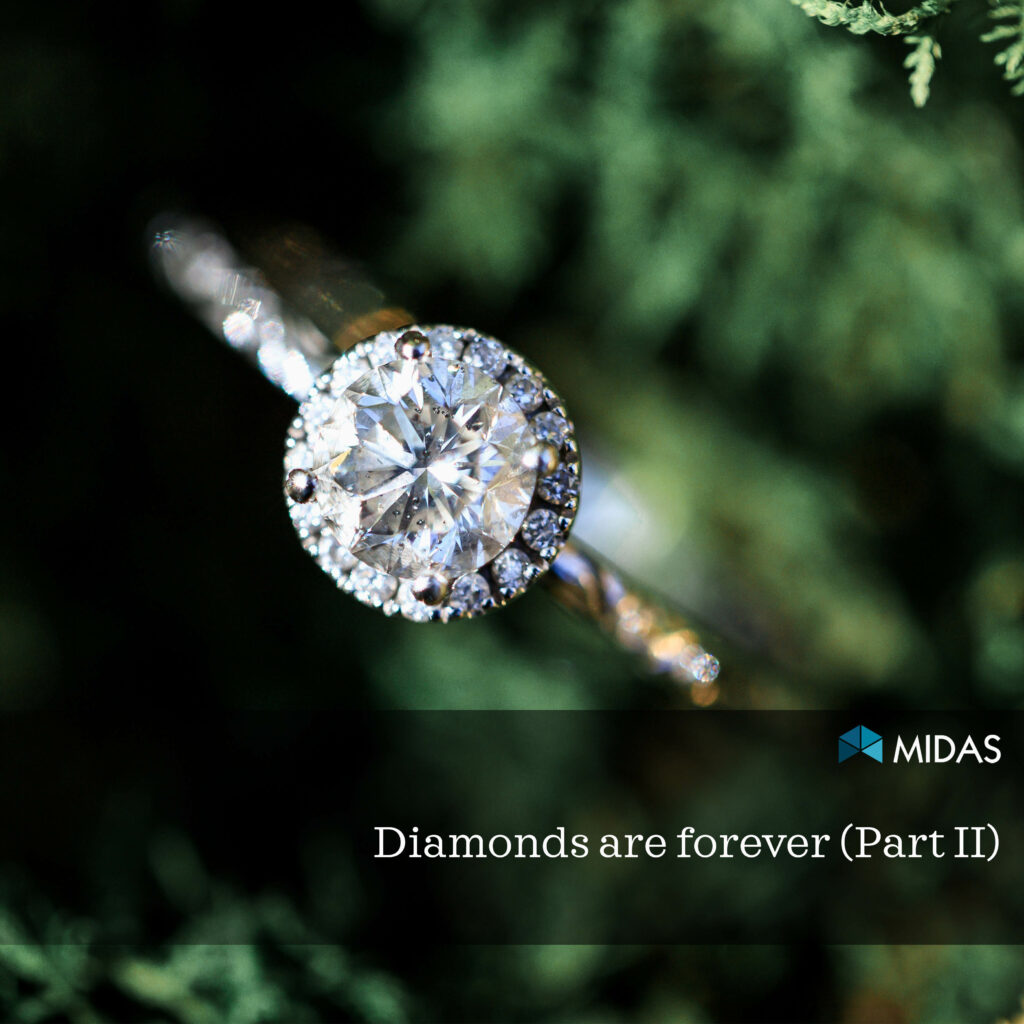 Like any commodity, the value of diamonds can go up, but it can also go down. With diamonds, you have to be patient, their value goes up slowly. On average you need to hold on to them for about 5 years. If you sell a diamond ring too fast, then you can expect to receive between only 20% and 60% of what the ring originally costs, depending on where you bought the diamond.

How to Get a Good Quality Diamond

Have you heard the expression, ‘GIA Certified’, what does this mean? When choosing a diamond, it is advantageous that it has have been graded by the GIA. GIA stands for the Gemological Institute of America and in their report, the diamond is analysed on 4 crucial points…cut, colour, clarity, and carat weight. These are commonly known as the 4 C’s.

The colour is graded on a scale, the carat by weight. Experts also look at the symmetry and finish. The highest value diamonds are white, symmetrical and the clearest.

The diamonds are sent to a laboratory, where they undergo many gruelling tests and evaluations. At the end, a GIA Report is produced. A GIA Diamond Report gives the diamond a guarantee of quality. It gives the buyer peace of mind that an unbiased third party has looked at and evaluated the gemstone for authenticity and status.

The GIA hold the best reputation for grading. Since 1931, they have been a leading authority on all things gem-related, they are at the forefront of science, geological research, and diamonds.

Diamond Exchanges Around the World

There are 30 diamond exchanges in the world, but where are they located? Here are the most popular.

The largest and considered the most professional is The Israel Diamond Exchange Ltd. Located in the Tel Aviv District city of Ramat Gan, Israel, it is the centre of Israel’s diamond industry. Established on the 8th December 1937, it started as a single room and now boasts a massive complex of 4 buildings. With 3000 members, it is estimated that around 6,000 people visit this exchange every day!

The Antwerp Diamond Exchange (AWDC) in Belgium has around 2000 members.

For over 500 years, Belgium is considered to be the world diamond centre. Many jewellery shops don the little alleyways, offering the most beautifully crafted diamonds, but to get inside the exchange itself is very difficult, a recommendation is needed.

In London, you will find the London Diamond Exchange. Otherwise known as London Diamond Bourse (LDB) this centre was founded after the second world war by refugees from Belgium. Inside, standards are extremely high, members must adhere to extremely high codes and rules. This exchange keeps its membership low at 700. This motion is reaffirmed with a quote from their headquarters, being a member ‘assures that the goods purchased are from a vetted professional of good standing, who is accountable to the industry for their business dealings’.

Only open since 2010, the youngest diamond exchange in the world is in Toronto, Canada. This was a much-needed upgrade, as Canada is now the third-largest producer of diamonds. Until recently, their diamonds were distributed in a very dated way, through the historical distribution channel.

Synonyms with diamonds is India, the first place for them to be discovered. In Mumbai, there is the Bharat Diamond Exchange, which took 20 years to erect. It has 2500 members and consists of 26 towers, all with 9 stories and 24,500 safety deposit boxes!

Diamonds You Need To Know

Found in 1867, The Eureka was discovered by a 15-year-old boy! The lucky boy was Erasmus Jacons, it was found on the Orange River in Northern Cape Town in South Africa. It is yellow in colour and oval in shape. The boy gave the diamond to his neighbour who had an interest in unusual stones. The stone was then sent in unsealed envelope to Dr. W.G. Atherstone. The Dr identified the stone as a 21.25ct brownish-yellow diamond and it was sold to Sir Phillip Wodehouse for £800. The Eureka Diamond is credited with being the first diamond discovered in South Africa.

This is one of the largest yellow diamonds to be found. It is shaped as a cushion cut, boasting 90 elegant facets. This diamond was also discovered in South Africa in 1878. Its permanent home is at the Tiffany & Co. flagship store in New York City.

The Heart of Eternity

Vivid blue in colour, this heart-shaped stone is one of 11 rare blue diamonds in the world. It was only showcased in 2000 as part of a special collection of De Beers Millennium jewels. The Millennium Star also featured in this collection.

As the centre piece of De Beers limited Edition Millennium Diamonds collection exhibition, this diamond first came to light in 1990 when it was discovered by a digger in the Mbuji-Mayi district of Zaire, Central Africa. It has a flawless pear shape and is the second largest faceted D-Flawless diamond in the world. As this is classed as one of the most beautiful diamonds in the world, it is deemed as priceless.

Discovered again in South Africa, at the Premier Mine on the 26th January 1905, this is the largest gem-quality diamond ever found. Sir Thomas Cullinan, the Mines’ Chairman, was visiting the mine on the day it was discovered thus it was named in his honour.

The diamond was presented it to England’s King Edward VII as a thank you for granting the constitution to the Transvaal Colony. The diamond made its way to Amsterdam’s House of Asscher, where it was divided into 9 big stones and 96 smaller ones. The 2 largest were kept for England’s regalia . The Transvaal government bought the remaining stones and pieces and presented the other 6 major gems to Queen Mary in 1910. 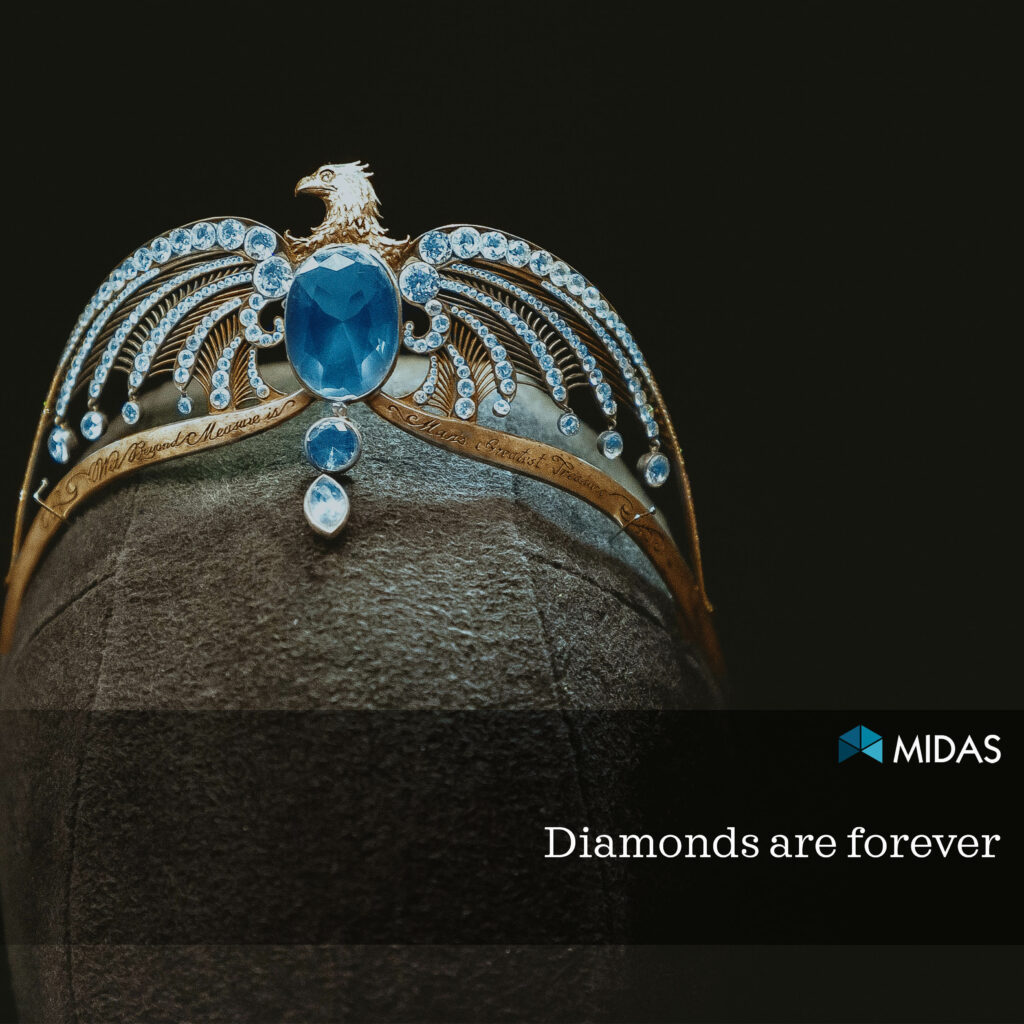 Diamonds, the most popular gemstone, have connotations of high class and sophistication. They are associated with power, success, glamour and, of course, the symbol of devoted and ever-lasting LOVE.

1477 was the first time that diamonds were documented as the material symbolism of love when Archduke Maximillian of Austria proposed to Mary of Burgund using a diamond ring. This is the oldest record of these precious gemstones being used as part of a marriage proposal.

This suggestion is optimised in the cleverly crafted 1947, De Beers advertising campaign, which used the tag line ’Diamonds Are Forever’. Diamonds are indeed indestructible, they will never wear down, scratch, or be destroyed. The symbolism behind being gifted a diamond indicating that a persons love will last forever and never fade. Diamonds in a ring indicate a lifelong commitment. They will last forever and can be passed down through generations to come as a precious family heirloom.

In the 1950s Marilyn Monroe reaffirmed that ‘Diamonds are a Girls Best Friend’ in the hit movie    ’Gentlemen Prefer Blondes’. This increased their popularity furthermore. But what are the other reasons why they are known to be our ‘best friend’?

We all enjoy these glistening stones of beauty, but what do we really know about them? Let me explain a little more about these objects of desire and how they came to be! And what better place to begin than at the VERY beginning….

150-200 km below the surface of the earth, molten lamproite, and kimberlite magma combines, but the conditions have to be just right for diamonds to form. The pressure needs to be 45-60 kilobars and the heat 900-1300 degrees celsius to ensure the carbon atoms crystallise.

The word “Diamond” comes from the Greek word “Adamas” which means “unconquerable and indestructible”. Diamonds are actually the hardest natural substance found on the Earth.

The oldest diamonds are believed to have been created around 3.3 Billion years ago, and were first discovered in India and shortly after in Brazil. South Africa, Angola, Botswana, Namibia and Congo; however today, diamonds also found and mined inGuinea, Lesotho, Siera Leone, China, Tanzania, Ivory Coast, Guyana, Central African Republic, Canada, and Australia.

As we now know, diamonds are billions of years old, but it is only in the last centenary that the uncut diamonds have been transomed (cut), releasing their utmost beauty and light to become the beautiful items that we all treasure.

A facet is a ‘one side of something, many-sided, especially of a cut-gem.’ (Oxford English Dictionary)

With 57 facets, the most popular diamond cut and shape is the Round Brilliant (about three-quarters of all diamonds sold are round). Also popular is the Princess Cut, a square shaped formed from a crystal shape rough diamond. We also have the Cushion Cut that has become more popular recently as new technology has emerged to enable the diamond cutters to create even more facets.

For those who like the more contemporary style, there are the Emerald and Square Emerald cuts. The shape of the diamond refers to the outlines and the cut refers to facets/shape.

As in all fields of expertise, naturally, things evolve over time with the introduction of newer technology. Diamond cutters have thus found new ways to enhance the light. Great for those who love all things shiny as new shapes have now been introduced, The Pear, Marquise, and Heart shapes are some of these. But the newest one to hit the market is the highly sought-after My Girl Diamond. This beauty is deemed to be the only diamond in the world that has the perfect balance of fire and brilliance.