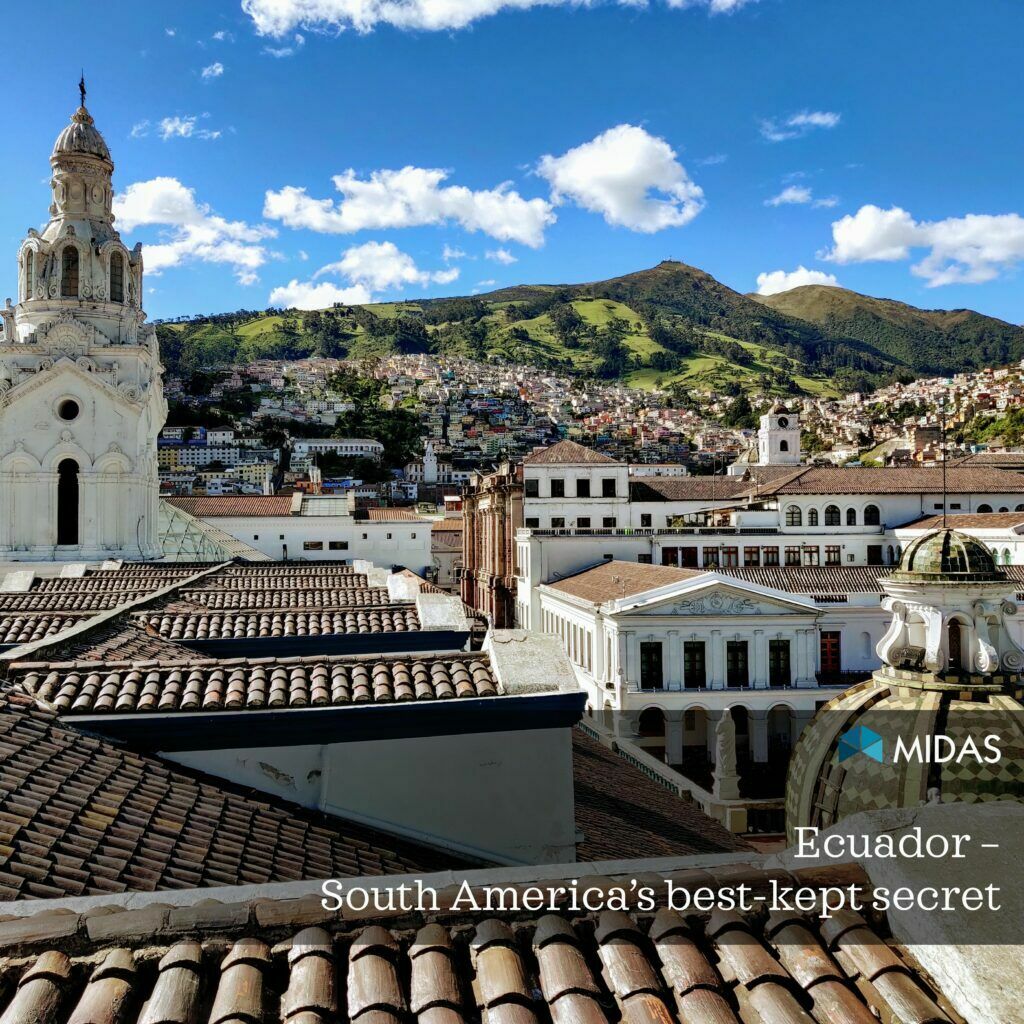 Ecuador, a country that has an array of delights to offer. The golden sands of the Pacific Coast, the Amazon rainforest, the foothills of the Andes, and the creme de la creme -The Galapagos Islands!

With an eclectic mix of cuisine, culture and climate, this country is defiantly one you should have high on your bucket list. Let Midas tell you why.

Think Indiana Jones battling his way through dense vegetation with a machete. If you want to mimic your idol, then you are in the right place.

The Amazon Basin, accessible by boat, is an absolute wonder. Along the waterways, you will find beautiful Amazonian lodges scattered around the lakes, and jungle camps to accommodate all your needs. You can also learn how tribes, like the Huaorani, have adapted to westernisation.

The wildlife that thrives in this vegetation is diverse, sloths, monkeys, caiman, and (yikes) snakes are all common. If you are lucky, you will see some rarer species too, jaguars, pumas, peccaries and if you’re really lucky, the pink river dolphins!

Known locally as Boto, these beautiful creatures enjoy the freshwater of the Amazonian rivers. These dolphins are actually born grey and slowly turn pink as they age. And surprisingly the male dolphins are pinker than their female counterparts. Don’t be confused by their cute exterior though, these animals are tough and will eat pirañas for breakfast!

If you enjoy spectacular sunsets (who doesn’t), then you are defiantly in the right place. Playa de los Frailes, situated in the Machalilla National Park, has been rated as one of the finest beaches in the world. With its wonderful white sands, it is home to some very lucky Inca-defended families, who often take advantage of its therapeutic sulphur lake and mud baths.

Along the 200km pacific coastal stretch is the Ruta Spondylus, this road connects Manta in the north to Santa Elena in the south. Running parallel to the coast, you can discover along this track the most beautiful beaches, interspersed with quaint fishing villages.

A fact you may not know. Contrary to popular belief, Panama hats originated not in Panama, but in Ecuador’s Montecristi. In this charming colonial town, you can grab yourself a bargain and pick up a genuine straw brim at a fraction of the price.

Quito, the capital, is nestled in the slopes of the Andean volcano, Pichincha. Still active, it last erupted in 1999.

If mountain adventure excites you, then your first expedition needs to be an acclimatisation climb of the steep tower of the city’s Basilica del Voto Nacional.

For expert mountaineers only, Chimborazo (6,263m), which can be seen in the skyline to the south should be your goal. Its summit is the furthest point on the surface from the earth’s core, and if conquered you can boast that you have stood on the closest land to outer space!

If you still have the strength, why not ascend the rim of the Quilotoa crater, where you will witness South America’s striking three-kilometre-wide, uber blue, lake-filled caldera. If tropical rainforests excite you, then make your way straight to the Andean foothills.

As if Ecuador hasn’t given you enough, we leave the best to last! The Galapagos Islands. These 19 islands that inspired Charles Darwin’s theory of evolution when he visited in 1835 are on the UNESCO World Heritage list. Know as one of the most remarkable places for flora and fauna, these islands are a must for any botanists and wildlife lovers.

Home to 9000 species, you will be amazed by the vast range of plantations and wildlife. Witness flamingos, Sealion, Penguins, Frigatebirds, whose throats become red balloons, sea diving iguanas, ginormous tortoises and so much more.

We, at Midas, are sure our guide has got the fantasising about your Ecuadorian adventure. Now that you’re ready to organise this trip of a lifetime, let us assist you every step of the way. Adventure awaits!

In addition to tourism, the country is widely agricultural, which has seen over the last decade a significant tourism growth.

For those who are courageously looking for new opportunities, we have

land for your agricultural or residential developments.